What’s going on in Chile?

I would like to share some personal opinions, those which coincide with various press articles, Spanish and French, which seem to me to be serious.

What is happening in Chile today?

Without getting into the most serious problem, because in Chile, the political constitution of the Republic adopted under the dictatorship of Pinochet – in 1980 – is still in force, which could not be seriously amended, because a very high quorum is required in Parliament. Pinochet’s right wing with its 30% prevents it, among other measures that affect the country’s democracy.

More specifically, without popular support, Piñera ruled for two years exclusively with the support of economic power and right-wing politicians.

The Chilean people have therefore taken to the streets to defend their rights and fight against the abuses of the powerful.

How do you explain that this terrible form of repression is being used and that it has caused so many deaths?

The political right that runs the country has a fascist and Pinochetist mentality. The armed forces formed under Prussian influence are of Nazi tendency.

What does this have to do with what is happening in other Latin American countries?

Everything on this continent is serious and its inhabitants are coordinating.

Some examples: Argentina, defeating to the right … but in the polls; Bolivia has a popular government, but the right wants to oppose the recent presidential elections; Peru, all former presidents were caught up in corruption scandals; Ecuador, its uprising was an example and an influence for the Chileans; Brazil, commanded by a right-wing maniac and criminal; Venezuela, in the chaos fighting the blockade of the Americans: etc. etc.

What solutions for the peoples of Latin America and the whole world in the face of this “neoliberal” policy, as the media say?

I believe that we are in a change in the history of humanity, given the failure of inhuman economic policies, generated by the greed of the powerful; where money and consumption are the happiness of men and women; where religious dogmas are in sharp decline thanks to scientific progress; the development of free thought will come out of mental darkness many; there is the wonderful modern technology … but it results in the unemployment of millions of workers, which brings serious short-term difficulties.

In other words, the problem is quite serious.

How did chaos begin in Chile?

The Chilean government has increased (from 800 to 830 Chilean pesos = €0.047) the ticket used daily by nearly 3 million people.

This negligible value is “the drop that caused the glass to overflow” and sparked protests from high school and university students, entering the subway without paying and lifting payment screens to allow passengers to enter free.

On Friday, October 18, riots multiplied with the massive support of other people of all social classes. The violent intervention of the police, in trying to drive out the demonstrators, generated a very serious confrontation, never experienced in the most violent days of the country, Far removed from the thymus and the submissive image that still remained of the criminal dictatorship of Pinochet and all his civil acolytes who are currently in government with Piñera.

What did the government of Sebastián Piñera do?

On Saturday 19, at dawn, President Piñera declared “a state of emergency” and, for the first time in a democracy, since 1990, the army descended into the street heavily armed and equipped with tanks. In addition, the measure involved a restriction of freedom of movement and all kinds of mass meetings. But it has increased protests and crime.

Approximately 10,000 soldiers and police were deployed on the streets of Santiago.

To date, at least 20 people have been killed, more than 300 injured, countless missing and more than 2,000 arrested.

On the night of Saturday 19, Piñera cancelled the increase in the price of metro tickets. This did not prevent the protests, because these euro cents have nothing to do with the real social problem.

What was the reaction of the public? 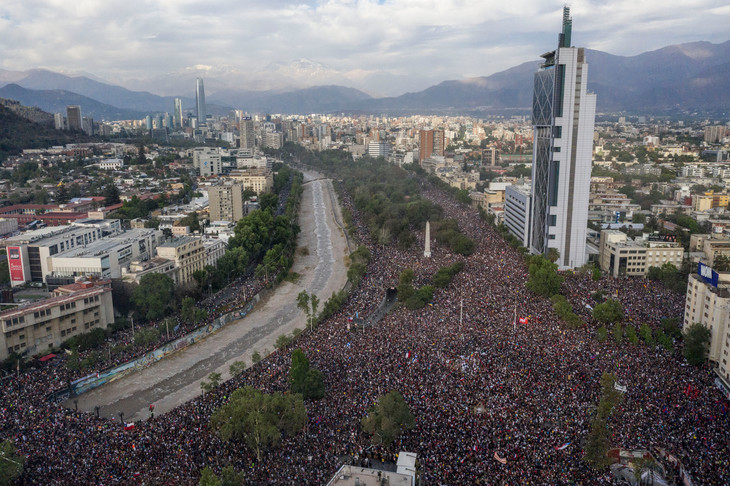 Since Sunday 20, the demonstrations have spread throughout the country and are still topical. Every day we have damaged public and private buildings; strikes of port workers; teachers; in the public health sector; among many vandalisms.

This led to the extension of “curfew” in different cities. The courts were suspended and several companies decided not to open their doors for safety reasons.
In this regard, Piñera declared: We are at war against a powerful and relentless enemy who respects nothing and no one and who is ready to use violence without limit, even when it involves the loss of human lives, for the sole purpose of producing the greatest possible damage”.

In other words, with the insolence of the present political and economic right, he does not understand the social problem of the great masses of Chileans overwhelmed by the lack of economic income which almost prevents them from surviving.

Stability, growth and fiscal discipline were the law of an exemplary country in the complicated environment of the countries of the Southern Cone of America, but these accounts concealed a very unequal society, with a middle class on the edge of the economic precipice, a deplorable educational system; and a general situation that did not allow social improvements for the vast majority of national and immigrant residents.

From outside the country, only the achievements of Chile have been observed, but inside, fragmentation, segregation and youth are very present, although the dictatorship has not lived; who withdrew from the vote several years ago; but who was fed up with it and who went down into the street to express his anger and disappointment; that is what the experts explain.

Chile is experiencing annual inflation of 2%, poverty of 8.6% and an expected growth of 2.5% for this year, one of the highest in the region in crisis.

It also has the highest per capita income in Latin America (€17,500). But, on the other hand, its pension system was criticized, the majority of income paid being below the minimum wage; high health and education costs; and the constant pressure of the housing market, which makes it impossible for many people to access a house; all this has become a difficult situation to contain.

On top of that is the high level of household debt in Chile. One in three people over the age of 18 has a financial balance that they cannot cope with with their resources. This debt affects in particular thousands of people who bear the burden of belonging to a middle class and for whom there are not many benefits.

We do not know when the demonstrations will end. For the moment, the Santiago metro has partially opened one of its lines. Several soldiers protect the crates.

The Chilean government has announced that beyond the subway, more than half a thousand public, municipal and intercity buses will be available, to which would be added private taxis to cover the transport demand of the inhabitants of the Chilean capital. During that time, courses were suspended in most of the country.

The President and the authorities of the fragile government meet with the presidents of the parties and parliamentarians, members of the government and opposition, to explore and hopefully progress towards a social agreement. But, in a rather incredible way, social and workers’ organizations were not recognized and received with consideration.