The National Federation of Free Thought has been informed of the Québec’s laicity1 Bill 21 by the free thinkers, humanists and activists who campaign for secularism in this province of Canada.

To have a rational analysis, we must have in mind that Québec is a State forming part of the Canadian 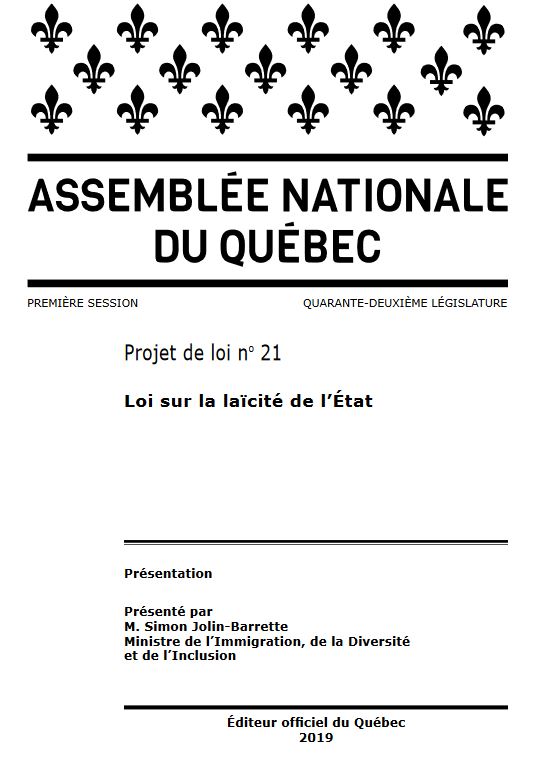 Confederation, which is a constitutional monarchy, whose sovereign is also the Chief of the Anglican Church. Although there is no State religion in Canada, it is therefore not a Republic and the separation of religions and the State exists only in the jurisprudence and not in a law.

Consequently, a strict analogy with the French situation would be wrong. Any step forward towards the secularism of the public-School system and the State must be vigorously supported. In this matter, as in so many others, there can be no cultural “imperialism” on the part of France.

The Bill begins with this assertion:

2 – The laicity of the State is based on the following principles:

The story of secularism in France and in Quebec is naturally different, and the same provisions cannot be mechanically applied from one country to another, but the bulk of Bill 21 is a powerful tool for establishing and developing secularism in Quebec.

The “reasonable accommodation” Act will be therefore modified by the following amendment (20): “This Act imposes, to the extent it provides for, a duty of religious neutrality on personnel members of public bodies in the exercise of their functions, in accordance with the requirements of State laicity.”

While it is problematic that the law foresees a cohabitation of prohibition and authorization of religious signs for the staff of public bodies in relation to the anterior situations, the fact remains that the momentum that will be triggered, if this law is adopted, will probably resolve in the future this contradiction.

Secularism is the future of peoples!

The Separation of Churches and State is the way to make it happen!

1 The word “laicity” – a translation of laïcité, a term rooted in the French Revolution – is used 18 times in the bill while “secularism“, the frequent English translation, isn’t used once. (Benjamin Shingler for CBC News).