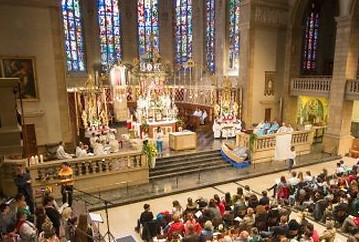 The Grand duchy of Luxembourg has no secular constitution, which means that freedom of practicing religious observances has full power. The Catholic cult has become the standard which must be followed. That is why everything that is religious, especially Catholic is automatically cultural.

It is not the pandemic that has succeeded in breaking the Catholic dominance! When the cult becomes a political priority, culture is in losing position. Thus it was necessary to celebrate Christmas and Easter with all possible means.

The Catholic Church did not let a slippage stop them. Thus, the priest of Diekirch celebrated Mass for several days in the church’s front, during the first strict confinement of the pandemic, when access to churches was prohibited to the general public, before being called to order.

The Catholic Church did not miss the opportunity, with the media’s help, to act as the representative of collective consciousness. On RTL-radio, on December 13 2020, the broadcast «carte blanche» (free rein) helped to justify the opening of churches during confinements too. The argument that was used can tell a great deal: «Here where 2 or 3 meet in my name, I am among them» …Jesus’ words.

As for the contradictions generated by the management that hits elderly people, The Church kept silent. The «Luxembourg Free Thought» has made a stand, as of the first confinement, by publishing the following message (on Facebook, but also in «la Voix de la Libre Pensée» no. 351 (the voice of Free Thought) :

«The management of the health crisis of Covid-19 is more and more contradictory, misleading and humiliating, especially as far as the question of elderly, supposedly vulnerable people’s protection is concerned.

Confinement and deconfinement too must be organized with the aim of re-establishing a situation of public health without risk, but while respecting all citizens’ freedoms! »

If some great events of the Catholic cult in Luxembourg had to be cancelled, such as, for instance, the «hopping procession» of Echternach on Whitsun Tuesday, or the final procession of «the Octave» which always gathers thousands of people, a practical reorientation was very quickly implemented during the pandemic, the Catholic Church entered the digital era. Tolerated masses have been broadcast and still are on social networks. It has been an enormous success, sometimes making the audience explode. It is no true surprise, for The Church was only waiting for the «right moment» to convert its «lambs» to the digital era. For as the French Father Th. Hubert said: «the good Lord knows how to use this spiritual mediation».

The pandemic of Covid-19 has not altered the clerical impact on society, on the contrary, the Catholic Church, thanks to its societal influence, is stronger than ever.