Live from Lebanon with Georges Saad

of the Lebanese Association of Philosophy of Law

International Association of Free Thought: The demonstrations in Beirut and throughout Lebanon are important and determined. Who are the demonstrators and what are they demanding?

Georges Saad: It is almost an insurrection, a « true revolution » as Bakunin said (revolutionary spontaneity). People are tired of waiting, of believing in corrupt leaders. The Lebanese no longer want General Aoun, who has done nothing so far for three years. A country where people no longer hesitate to talk about their starvation.

AILP: Are there any similarities with the situation in Hong Kong, Algeria, Ecuador or Catalonia, for example?

G . S: Certainly, there are commonalities with what is happening everywhere else (in the Arab countries especially- Algeria, Sudan). But also, given the influence of France, « Gilets jaunes » [yellow vests] too.

IAFT: Beyond chasing the regime, it seems that demonstrators are calling for an end to the multi-faith regime. Is this a secular [laicity , i.e . : Separation between Churches and State] claim?

G.S: In fact, it is a revolt that takes place outside religions, it is for the separation between Churches and State. And everyone is united around social claims. But to say that is really the way to laicity is very risky and I don’t think so. In the places where people demonstrating, the Blessed Virgin was prayed.

How do you see the next steps? Could the IAFT issue a press release, notably recalling the final declaration of the 2012 symposium?

G.S: It’s hard to say how this will evolve, but surely before October 17 is not like after. An important step has been taken. There is a new generation of young laymen, courageous, socialist, revolted. And they say it loud and clear. The Lebanese in principle is someone who is ashamed to say that he wants money and to talk about social disparities. I believe that many of these young people (very many) have travelled, especially to France, and have caught the challenge virus.

At the colloquium «Religion, Secularism and the Rule of Law», held in Beirut, Lebanon, on 13 and 14 April 2012, at the joint initiative of the Lebanese Association of Philosophy of Law and the International Association of Free Thought, have been debated on questions concerning the secularity of the State, the secularization of institutions and the establishment of the principle of the separation of religions and the State, for the advent of full freedom of conscience, equality of rights and democracy.

A large audience (about 100 people), both in terms of the quality and diversity of the speakers and the number of participants, widely debated the relationship between secularism, religions and atheism. A large number of participants were concerned about the need for a civil state beyond religious communities.

The large number of young people from Lebanon and their enthusiasm for secularism is, in this regard, quite positive.

Many aspire to the exit from the political confessionalism that encloses individuals in their community of belonging. The aspiration to equal rights is great.

The secular state, the civil state, are certainly the means to preserve and promote the unity of the Lebanese nation. 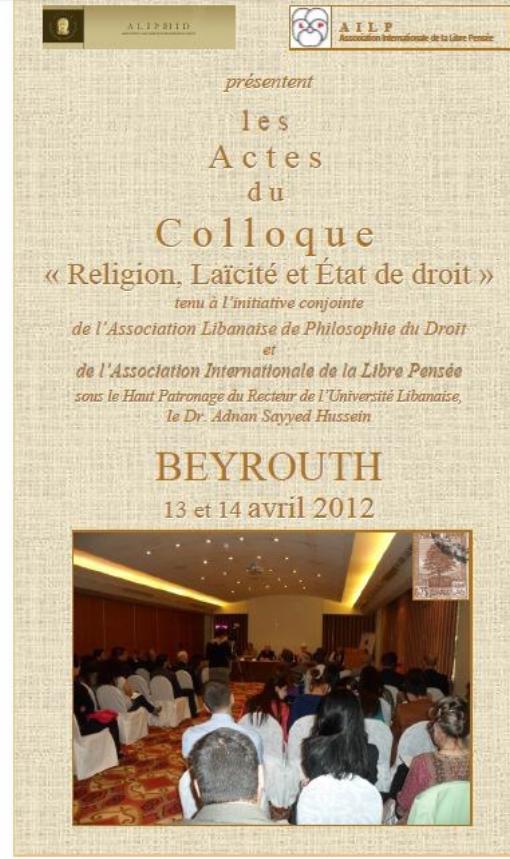 In the presence of members of various existing communities in Lebanon, religious, laity, free thinkers, representatives of deputies, a courteous but intense debate took place on all these issues.

The participants, in their large number, believe that the holding of this colloquium is a positive first step in the path of the secularization of society and institutions for the establishment of a civil state, prelude to a secular state.

They decide to pursue this necessary debate together with all the components of the Lebanese Nation in the light, in particular, of the international contributions cited in this colloquium.

The participants hope that the Lebanese Association of Philosophy of Law will be the pivot of the ongoing debate.

The publication of the proceedings of this colloquium in one edition in French and another in Arabic will be a material element to continue this debate and this meeting on 13 and 14 April 2012.

The wide dissemination of these Acts, in Lebanon and beyond, will encourage joint reflection and the search for the necessary solutions.

Conclusions approved by participants on April 14, 2012

To order these Acts

Please if you want to ameliorate this translation write to the webmaster [geraldcusin@free.fr]