Speech of Michel Godicheau, delegate of the International Association of Free Thought at the funeral of Philippe de Menten, eminent free thinker, worker and republican activist in Belgium.

We were both public service trade unionists, me in France, him in Belgium, and we considered that the question of Free Thought had something to do with our union struggle and was not a matter for specialists. And also we thought that Free Thought was not another name for secularism. Secularism is a matter of institutions and Free Thought is a matter of method.

Philippe was already ill, but he had a project: to provide Belgian free thinkers with an organized support point. I myself had experienced in Luxembourg, at an international congress, the difficulty that Belgian free thinkers had in devising even an autonomous path. And this despite a rich past, solid institutions like the ULB, conquests like the Right to Die in dignity and undeniable local dynamics.

We did not know each other, we each had both a reserve of old militants, but soon the human warmth combined with the firmness of convictions prevailed and the courage of that man blew me. According to the vagaries of his health and of my travels in Belgium, I met him, he hosted me and we moved forward with our goal. The path of independence is always a difficult one, we have advanced, retreated, adjusted our positions. After Oslo, where the founding congress of the IAFT was held in 2011, it was obvious to all of us that in some countries, including Belgium, it was necessary to maintain ties with everyone and avoid any attitude of proclamation. Yet it was also necessary to assert an independent kernel and Philippe found resources to regroup people, despite the cruelty of his health situation. This was the birth of CLP-KVD.

Philippe’s friends and family can be proud of having worked alongside a free internationalist thinker and a warm activist, a stubborn builder.

I would like to end with a few verses by the great poet and revolutionary Vladimir Mayakovsky:

I throw down on a cloud
the burden
of things
and of a weary body
propitious places I have never before visited
i look around
This surface
So smoothly licked down,
is this then the heaven so vaunted ?
We’ll see, we’ll see !

[Finally they asked the poet to make himself useful, to find his place ]

« If you like,
I’ll spread my body
on a cloud
and contemplate everyone »
No, they answered, «  that does not suit us » 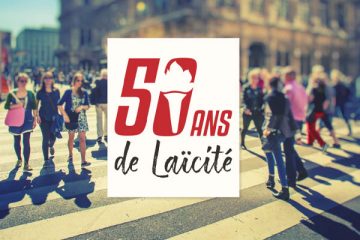 The Circle of Free Thought   The National Federation of Free thought Constitution, secularism and public funding of religions An international call by personalities has been published for the fiftieth anniversary of the Belgian Center Read more…

I am happy to answer your questions, but with the precision that I do it “on the fly” and that, although I want to be objective, it will be difficult to leave my subjectivity aside, Read more…