A BLOG BY KEITH PORTEOUS WOOD*

Do French clerics carry “get out of jail free” cards?

In March, a most egregious infraction of secularism in France passed almost unnoticed. Former priest Bernard Preynat was not imprisoned despite having been found guilty of the sexual violence against minors on a huge scale over decades.

He had been sentenced to five years in prison but was released pending appeal.

Preynat had friends in high places. He enjoyed the protection, in knowledge of his crimes, of the most senior Catholics in France. No less than five successive Cardinal Archbishops of Lyon – Renard, Decourtray, Balland, Billé and Barbarin.

Preynat’s case had already become a cause célèbre when Cardinal Barbarin was convicted of failing to report Preynat’s abuse under France’s mandatory reporting law. Preynat told the court that in both 2010 and 2014 he had confessed his abuse to Barbarin. He was not however defrocked until 2019 over half a century after the Church first learned of his of abuse. Barbarin remains unrepentant about this or his failures to report, casting himself in the role of victim.

The conviction was overturned, however Preynat’s victims have appealed that ruling to France’s highest court.

The public prosecutor had refused to bring Barbarin to trial, prompting victims to bring a private prosecution, and the prosecutor continued to oppose a guilty verdict. A powerful film about their struggle to achieve this is called Grâce a Dieu, a reference to reporters’ horror when Barbarin told them “by the grace of God, most of the offences fall beyond the statutes of limitation”.

“Huge” does not seem hyperbole. Using Preynat’s own admissions, the number of victims abused is around 2,000 since the 1960s, 85 of whom testified. On that basis, the five year sentence represents just one day in prison for each victim and rather less than that for each abuse. Having said that, many of the abuses fell outside the statutes of limitation.

Preynat has admitted the abuses and the sentence was materially less than the minimum of eight years recommended by the prosecutor. Even that certainly did not seem excessive, given the scale of Preynat’s abuse, and that he reportedly showed no contrition. Furthermore, the victims were scouts, and as a priest he was trusted as their scoutmaster, so Preynat also abused that trust and his power.

Many of the victims/survivors will feel they have been betrayed and deserve our deepest sympathy. First, they were abused by Preynat. Then the church hierarchy compounded the abuse by ignoring the continuing abuse, even though latterly the law and their own regulations required them to report it to the civil authorities. The clerics resisted all attempts by the victims to secure justice.

Finally, it pains me to question whether the judicial authorities have sufficiently taken into account the seriousness of the sexual abuse of minors by Preynat. In particular, given the hundreds of children he assaulted, could they not have exercised their power to detain him to prevent any repetition? Even Cardinal Pell In Australia in broadly similar circumstances was incarcerated pending his appeal.

it would be far from surprising if Preynat, 74, reaches the end of his life without having spent a day in prison.

We hope that the French courts will hear Preynat’s appeal as speedily as the present emergency permits.

Who else but a man of the cloth, so well connected, would be treated with such undeserved lenience? And, not just French archbishops but French bishops seem also to have licence to ignore the reporting law with impunity. 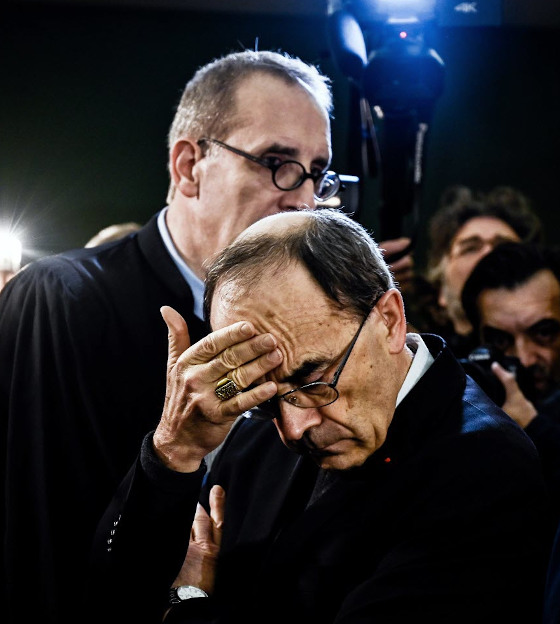 Cardinal Barbarin at the time of the verdict

The Preynat/Barbarin affair is a symptom of a much graver dysfunction. A French television investigation has accused 25 Catholic bishops of protecting 32 accused clerical sex abusers in France over the past half century and often transferring them to other parishes or even other countries. Four of these bishops are still in office and Barbarin has only just stood down. None have ever been imprisoned for failure to report.

And how many more? That list excludes, for example,  the Bishop of Beauvais and his two predecessors who had reportedly not disclosed to the authorities the multiple abuses by a priest called Matassoli as they were required to under the law. Matassoli had been accused of a catalogue of abuses of minors spanning sixty years. There is a suggestion from the police that Matassoli had been protected.

He was murdered late in 2019. The suspect is a young man who the priest had allegedly abused, requiring him to perform housework naked. The young man’s father had been abused by the same priest and his grandfather had committed suicide when he learned about this. The young man reportedly has mental problems and is now in a prison hospital. Had the bishops reported the abuse, presumably the priest would not have met his death in this way or the young man be in custody in connection with the priest’s death.

And that brings me to the complicit role of the Vatican, at the highest levels. The Committee for the Rights of the Child strongly criticised the Holy See (the Vatican) in 2014 over “priests who have been congratulated for refusing to denounce child abusers”, in a letter authorised by Pope Paul II relating to Bishop Pecan of the French diocese of Bayeux-Lisieux. He was later convicted for failing to report abuse.. And they are still at it. Cardinal Barbarin was advised in 2015 by the Vatican’s then Prefect of the Congregation for the Doctrine of the Faith to avoid scandal in defiance of the requirement of French law to report, advice Barbarin conveniently heeded.

*International spokesperson with special responsibility for the campaign against clerical abuse of minors. (Keith is also President of the (UK) National Secular Society).

Comment from a French priest who wishes to remain anonymous

“… your article is quite right. What works best in society is rarely written. There is very often a link between the attorney general of the court and the local bishop in the French departments. That is why it would take a change of scenery for most cases of paedophilia. You are also right to point out that the statute of limitations is too short in France and that there is a barrier to reporting. I know of a case at the Châlons-en-Champagne court. Grandparents had reported the danger of a priest to their grandchildren. The bishop removed the priest from the ministry. The gendarmerie conducted an investigation and the locals all retracted their testimony, leaving this couple of grandparents, who had come to the area for their retirement, alone in their assertions. The prosecutor of the Republic of Châlons, in agreement with the local bishop, then summoned the grandparents to court for slanderous denunciation. They were convicted and their punishment was aggravated by the Court on Appeal in Reims. They have had to leave the area and they have to pay several thousand euros for their punishment while they are good people with very modest incomes. You are right to act to ensure that justice is better done and better done in France.”

Clerical abuse victims are being betrayed. The state must act now.