Yesterday, when I thought that everything was lost in order to put an end to the fascist Constitution of the Republic of Chile, created during the military dictatorship of Pinochet, the figures of the president of the Senate (Alvaro Elizalde, declared agnostic, member of the Socialist Party) and the President of the Chamber of Deputies (Vlado Mirosevic, active free thinker, of the Liberal Party) managed to unblock, after three months, the political agreement to normalize the problems in order to reach a new political Constitution for Chile, for which we have been fighting since the social revolt of 2019.

There was a cross-cutting agreement in the commission that studied the problem of all democratic parties in the country, from the centre right to the communist party, excluding the neo-fascist republican party. 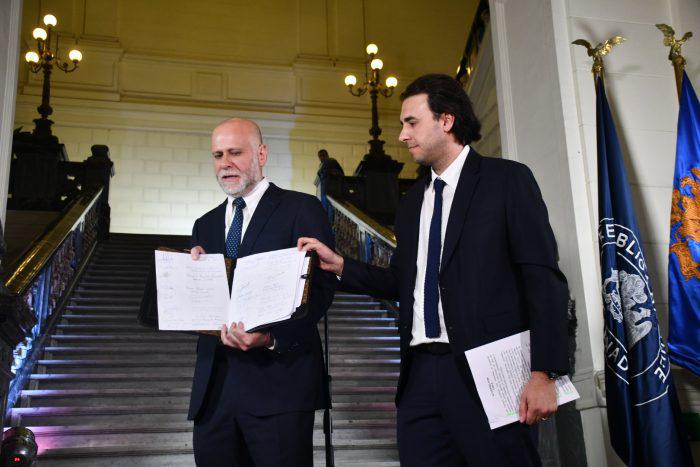 However, while such an agreement seemed unlikely, two events over the weekend gave the necessary impetus to resolve the remaining differences. The first was the indignation provoked in various sectors by the irruption of a group calling itself “Yellow” last Friday, which aborted an agreement, a political movement supposedly without interest, with excessive political ambitions and economic power, which is hard to explain.

The second fact is a public interview of José Antonio Kast, leader of Chilean neo-fascism, who intends to pursue the rigged Constitution by dictator Pinochet in 1980, placing in a difficult position the center-partyThe European Union is also committed to continuing the process of the new Magna Carta, which they support on the basis of their economic interests, if democracy is maintained in Chile.
If the final failure of the negotiations were confirmed, it would also confirm that on the right, the only voice that counts is that of the most extreme, conservative and fascist sector. This right wing, which has never wanted, does not want and probably will never want a new Constitution. A sector that, at some point, gave in to the constituent process is afraid that the alternative will be worse. This sector has put pressure on the more modern right throughout the dialogue process. A right that, while convinced of the need for a new constitution, is aware that its electorate is largely convinced of the contrary. Consequently, he was afraid to give the impression of capitulating to the “defeated” left and of accepting a formula that would endanger, on the electoral level, what was achieved today.

Moreover, there is also a sector of the left, fortunately a minority, which does not accept the reality of the outcome of the plebiscite and seeks interpretations, more to reaffirm its convictions than to understand the thinking of the majority. This sector prefers to maintain a permanent demand for change, rather than give in to a process that could lead to a new constitution that is insufficient for its ideal society.
Fortunately, when it seemed the most difficult, prudence and responsibility prevailed. In this area, the speakers of the bicameral parliament were key figures.

With styles far from conflict and focused on agreements, with prudence, without ceasing to maintain an open dialogue and without the despair of becoming the protagonists, they have undoubtedly imposed themselves, in times of so much mediocrity, as political figures of a stature we had not seen for years, the presence in the final document of “secularism” being one of the most important points.

It is also important to inform that in Chilean political activities, the “Chilean Chapter of the IAFT”, which brings together “all” free-thought organizations of the country, has a particular importance, in this case, the “Valentín Letelier Cultural Centre”, which is the representative of the Chilean Radical Party, a free-thought political organization founded in 1863, currently part of the progressive government that runs Chile.