Published by webmaster 1 on 1 September 2019

The international question has always been important in the activity of Free Thought on all fronts, on all continents.

Very quickly, as soon as the first associations of Free Thought are constituted in the nineteenth century, they are concerned about international problems and feel the need to regroup across borders to act together. I refer you to the reading of the excellent work of Louis Couturier on the Internationals of Free Thought. You will discover very interesting and exciting things.

The Separation of the Churches and the State, that is to say the separation of the temporal and the spiritual, or as the free-thinker Victor Hugo said “The State at its home, the Church at its home“, is something very old thing. There are traces of separation from this philosophical idea of ​​Separation of Churches and State, 4,000 years before the pseudo-existence of the swindler named Jesus Christ, who never existed. This principle appears in India, where there were a very large number of atheists and what could be called today humanists.

In the Greco-Latin civilization there are thinkers who theorize this question, like Protagoras who said “Man is the measure of everything“. If man is the measure of all things, then God has no place and no interest. Therefore, this principle of Separation of Churches and State is very old, since it puts man at the center of his destiny and that it is he, the measure of all things. There will of course be comings and goings, alleys and disappointments. Of course, against this principle which places man at the center of his destiny, we are going to experience a great misfortune: the appearance of monotheism.

From the moment when the power says: There is only one god, you must obey him, here is what to think and do, then, it is the beginning of the troubles for Humanity. We can not work for the emancipation of the human race without fighting religions, all religions, whose only function is to legitimize the oppression and enslavement of peoples.

This idea of ​​separation has always been linked to the struggle of freethinkers. But he is not the only one, far from it. Another strong idea is the fight for public education, for secular education. It is the fight for full and complete human freedom.

Here is what Francisco Ferrer, freethinker, libertarian, Freemason, said about his teaching: “Our teaching does not accept dogmas or usages, because these are forms that imprison mental vitality (.. We only spread solutions that have been demonstrated by facts, theories ratified by reason, and truths confirmed by certain proofs. The object of our teaching is that the brain of the individual must be the instrument of his will. We want the truths of science to shine in their own brilliance and illuminate each intelligence, so that, put into practice, they can give happiness to humanity, without exclusion for anyone by odious privilege. ”

This is also what declared the Honorary President of the French Freethought Jean Rostand in his tribute to Edouard Herriot, when he occupies his chair at the French Academy: “In the teaching that will be distributed to young citizens, to forbid any confessional or philosophical weighing, to train the spirits without conforming them, to enrich them without indoctrinating them, to arm them without enlisting them, to communicate to them a force of which they can make their strength, to seduce them to the truth to bring them to their own truth to give them the best of oneself without waiting for the salary which is the resemblance: who does not see the difficulty of strictly following such a program, but is there another to satisfy a shady conscience, as to respect for souls? ”

This question of teaching is therefore consubstantial with the action of freethinkers throughout the world. Therefore, the International Council of IAFT has decided that it will hold a major international congress in the summer of 2020 in Madrid to address this important issue: “Secular school and secularism of education”.

We will invite freethinkers, laymen, atheists, humanists, trade unionists, teachers from all over the world. Therefore, the International Council of IAFT has decided that it will hold a major international congress in the summer of 2020 in Madrid to address this important issue: “Secular school and secularism of education“.

We are going to invite freethinkers, laymen, atheists, humanists, trade unionists, teachers from all over the world, all those interested in this issue. We will solicit the help of all those who wish to speak on this issue.

We want to make this congress about secular education, the equivalent of the 1904 Congress of Rome for the Separation of Churches and the State. Our ambition is great, but it is necessary if we want to make things happen. We invite you to come and prepare with us.

The Montevideo Congress of AILP decided a few years ago to make September 20 of each year “The International Day of Free Thought“. This date marks the anniversary of the entrance of the Garibaldian and Republican troubles, by the Porte Pia, to Rome to proclaim Italian unity.

Giuseppe Garibaldi, Hero of the Two Worlds, is celebrated all over the world and especially in Latin America where he fought to liberate the continent. Many associations make 20 September an important date of mobilization for secularism and democracy.

As Luis Britto Garcia pointed out in a symposium in Caracas in 2007: “The two gestures that most inspired the Italian and Latin-American revolutionaries were those of Simón Bolívar and Giuseppe Garibaldi. Both engage in political emancipation struggles to cut the bonds of subjugation of their peoples to foreign powers. Both emancipate to unify the liberated peoples. Both promote republican, democratic and secularist ideas of the state and, with the limitations of each era, social and economic reform plans. “

At a time when the law of 1905 is seriously threatened by the pretensions of Emmanuel Macron, the nth President of the Fifth French Republic today, it is important to signify to all the clericals that the whole world always has its eyes fixed on this Great Work that is the Separation of Churches and the State in France.

Together in all the countries, defend the secularity, where it is established, and impose the, where it is necessary to establish the freedom of conscience.

I wish you good work at your congress.

Modern Day Crusaders is a well-researched exposition of well-funded religious extremists who seek to undermine basic rights, especially for women and LGBTI people. It was written this year and is revealing and unsettling. Unfortunately, it Read more… 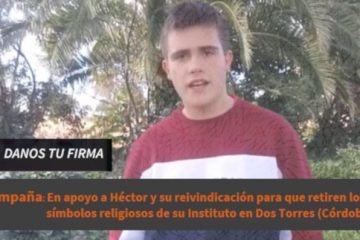 Hector is a 15-year-old student who has been fighting for three years now for religious symbols to be removed from her college in Dos Torres (Cordoba). His perseverance and efforts could count on the support Read more…