The breach of secularism is 150 years old

Maria Mantello during her speech on September 20 (Porta Pia, Roma)

For the anniversary of September 20, I am still thinking of the great mayor of Rome, Ernesto Nathan, who clearly marked the progressive turning point in history through the Breach of Porta Pia.

In his address to the Capitol on December 2, 1907, he declared: “We look to the future. We look through the Breach of Porta Pia”, outlining a radical renewal program (which it would have implemented) for individual and social emancipation in the name of freedom and justice.

For this new pact of democratic citizenship, it opened the Breach of secularism.

With the fall of the Pope King, the freedom of Italy, Europe and the world towards Catholic universalism was affirmed. It is not only Rome that has been liberated.

Nathan did not fail to mention this on the occasion of the institutional celebrations of September 20: “Through the Breach of Porta Pia came civil and human thought and freedom of conscience, forever destroying the wall of a moral Bastille: the temporal power of the popes. In its high philosophical and universal meaning, this is the feast of the people for the peoples“.

What representative of the institutions would say similar words today?

Over the years, representatives of the institutions at the Brèche site have been gradually removed on 20 September.

And this is what is emerging even stronger for September 20: either by the call to the polls of the Italians for the referendum on the cutting of the number of parliamentarians and the administrative elections (but was it precisely necessary to choose September 20?), or because of Covid, the presence of the institutions on the site of the Breche seems to be guided by the most absolute reserve.

Silence, Silence, made the famous geese of the legend Carducci say in his Song of Italy going to the Capitol, where he ridiculed the timidity of the government concerned not to disturb the Vatican too much.

Is this not still the sign today for a political class that seems pushed towards the definitive distancing of the Breach of secularism?

Yet this event continues to be the symbol of the historic turning point, represented by this statue of victory (Nike) which stands on the stele placed on the site of the Breche in 1895, when the national day of September 20 was instituted, then abolished by Mussolini in 1929 on the occasion of the signing of the Lateran Accords which gave the Church political and economic privileges. Privileges reconfirmed or expanded when the Concordat was renewed in 1984.

This national holiday was never restored, not even with the birth of the Republic: progressive demands were not listened to and the projects presented to Parliament were not even discussed. 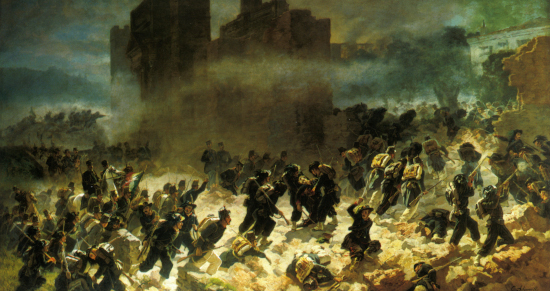 On the contrary, we have, as we have said, tried to throw this date and the Risorgimento (Italian unification – ndt) to oblivion.

And failing to succeed, try to launch disturbing operations of falsification of history: of the pope protagonist of this Italian unification (on the contrary he always opposed it), until attempts to put an equal sign between those who fought for liberation and those who, on the contrary, wanted to continue the theocracy.

Operations of historical falsification, subordinated to the alliances of reactionary powers for whom democracy must be reduced as the Unity of Italy.

The memory of 20 September means therefore re-establishing its historical significance as a bulwark of secularism, which is the public recognition of our ability to manage our own existential project in complete freedom and responsibility, by freeing oneself from dogmatic arrogance and its sacramental power relations.

To remember September 20 is to maintain its historic role as a bulwark against the never-abandoned clerical dreams which, by exploiting democratic and progressive language, seek, in the generalized crisis of the economy and politics that our country is going through, to regain control of the company.

And for this, they find easy allies in the ranks of leaders who compensate for the failure of the implementation of concrete policies for the promotion of freedom and justice through the display of an operetta trust, exposing like jewels, crosses, madonnas and saints.
While they do not fail to support the Church’s revenge on Porta Pia, the Church today became above all a cash-flow to obtain more and more funding from an Italian State in the role of great benefactor of the Vatican, which, thanks to the historic concordat, accumulates billions of euros annually (8 , de facto exemptions from the payment of energy consumption bills, exemption from taxes and duties on the myriad of its profitable activities: former monasteries and former colleges transformed into multi-star hotels, Catholic educational and health institutions … and more)

This Breach is there to remind us that on September 20, 1870, when our Bersaglieri entered Porta Pia, the pope lost his throne.

The Pope-King is this Pius IX who, in the face of the processes of political, social and cultural emancipation, proclaimed the dogma of the Immaculate Conception (1854); reaffirmed with the Syllabus (1864), the centrality of papal power and the Catholic Church and launched its anathemas against freedom of thought, conscience and teaching

And who, just a few months before the famous Breach, while intensifying the repression in his areas with hundreds of arrests of patriots or suspected suspects, reaffirmed the infallibility of the Roman pontiff with  Pastor Aeternus (18 July 1870).

Pius IX, who did not recognize the young Italian state and had excommunicated its king, parliament and government, had opposed any diplomatic attempt to annexate Rome and had wanted the «Roman question» to be resolved militarily. At 10 o’clock in the morning on September 20, 1870, with the entry of the royal army through the Breach of Porta Pia, he lost his throne.

With the restitution of Rome to Italy, the red thread of the history of the great humanist tradition, reborn, enlightened, of emancipation from the confessional power was restored. It was the last stage of the historical movement for the liberation of Rome, already expressed by the Commune of Arnaldo da Brescia, by the Republic of Cola di Rienzo, by the Jacobin Republic of 1798, by the Republic of 1849 which proclaimed freedom of religion by freeing the citizen of the believer: “The exercise of civil and political rights does not depend on religious belief” was enshrined in the fundamental principles of its Constitution.
The Renaissance of Human Rights and Freedom took the best of theocracy with this Breach of Freedom.

The Romans understood this well, who in that September 20 poured into the streets by waving the flag and shouting Vive Rome Libre! Long live freedom! Also reclaiming the Capitol, where they chased the papal zouaves and hoisted the Italian flag on the turret.
The popular song against the Zouaves who congratulate themselves on the expulsion of this foreign troupe with his chorus Out of Italy! The time had come, out the stranger” had become the hymn of rescue and was on all lips, as the military historian Attilio Vigevano recounts in his book “The End of the Papal Army.”

Published in the MicroMega online magazine of June 2020

Categories: EventsSeparation between religions and States